“All Scripture is given by inspiration of God, and is profitable for doctrine, for reproof, for correction, for instruction in righteousness, that the man of God may be complete, thoroughly equipped for every good work” — 2 Timothy 3:16-17 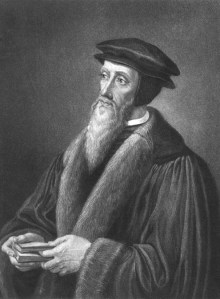 In order to uphold the authority of the Scripture, he [the Apostle Paul] declares that it is divinely inspired; for, if it be so, it is beyond all controversy that men ought to receive it with reverence. This is a principle which distinguishes our religion from all others, that we know that God hath spoken to us, and are fully convinced that the prophets did not speak at their own suggestion, but that, being organs of the Holy Spirit, they only uttered what they had been commissioned from heaven to declare. Whoever then wishes to profit in the Scriptures, let him first of all, lay down this as a settled point, that the Law and the Prophets are not a doctrine delivered according to the will and pleasure of men, but dictated by the Holy Spirit.

If it be objected, “How can this be known?” I answer, both to disciples and to teachers, God is made known to be the author of it by the revelation of the same Spirit. Moses and the prophets did not utter at random what we have received from their hand, but, speaking at the suggestion of God, they boldly and fearlessly testified, what was actually true, that it was the mouth of the Lord that spake. The same Spirit, therefore, who made Moses and the prophets certain of their calling, now also testifies to our hearts, that he has employed them as his servants to instruct us. Accordingly, we need not wonder if there are many who doubt as to the Author of the Scripture; for, although the majesty of God is displayed in it, yet none but those who have been enlightened by the Holy Spirit have eyes to perceive what ought, indeed, to have been visible to all, and yet is visible to the elect alone. This is the first clause, that we owe to the Scripture the same reverence which we owe to God; because it has proceeded from him alone, and has nothing belonging to man mixed with it. ¹

Part of this quote cited in: James Boice, Standing on the Rock: Biblical Authority in a Secular Age (Grand Rapids: Baker, 1994) pg. 23